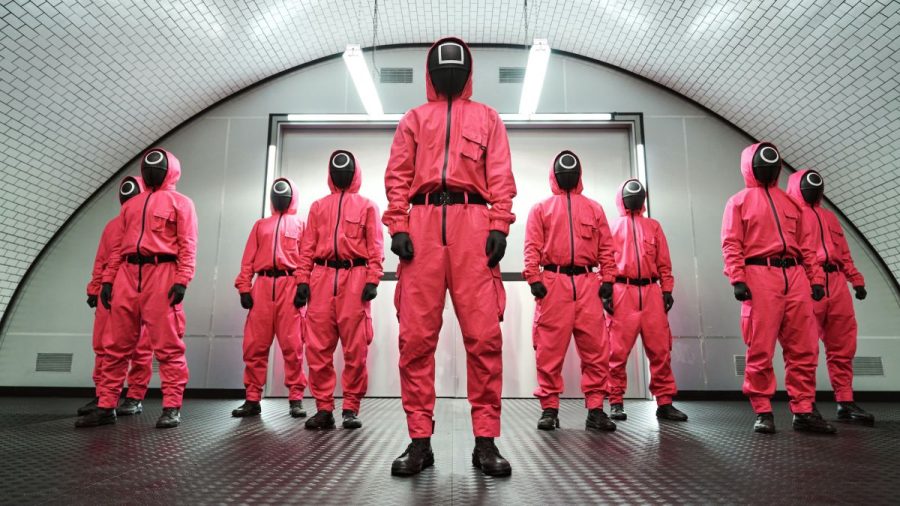 Released on September 7th, Squid Game is the first Korean show ever to hit No. 1 on Netflix in the U.S.

Let’s talk about Squid Game. It’s the show that topped Netflix’s charts with 111 million views within the first month after its release, surpassing Bridgerton’s previous 82 million. And it’s entirely a Korean show, with English subtitles for Americans to follow along. Squid Game has captured an American audience, that, while binging the show, might not realize the many details they were missing out on due to the limits of subtitling.

The show follows the story of Gi-hun, a divorced father with a gambling addiction and a hopeless amount of debt. It draws the audience in with a classic K-drama storyline, as you see the family conflict and tension playing out between Gi-hun, his daughter, and his ex-wife. However, by the end of the first episode it takes a dark turn, when Gi-hun along with 455 others are lured into a deadly tournament of children’s games with a large monetary prize promised for the final winner. Over the course of nine episodes, the players fight to the death while battling moral conflicts about it all.

Squid Game is reminiscent of The Hunger Games, with members of the lower classes  participating in a deadly competition to determine one winner – all for the entertainment of the higher class. However, a major difference is that The Hunger Games is set in a dystopian society, while Squid Game is set in regular life in Korea today. In this manner, Squid Game makes an even more striking comment on economic inequality and society as a whole. Given the success of The Hunger Games, it’s clear that this theme is popular among Americans. Perhaps viewers can empathize with the characters, or at least feel sympathy for them, even if they can’t directly relate with the character’s situation.

For the kickoff of the competition, the players participate in a game of Red Light, Green Light. Although the premise of the game is one that any American can recognize, the translation to “red light, green light” is not accurate. Instead, the chant “mugunghwa kkoci pieot seumnida” actually means “the hibiscus flower is blooming,” referring to Korea’s national flower. As my own Korean grandmother who grew up in South Korea explained, the significance of the game is deeper than simply “red light, green light.” It pays tribute to the Japanese invasion, when Koreans were forced to stay in place and were not allowed to flee. “The hibiscus flower is blooming” represents pride for their nation, so when the phrase is being said, players are allowed to run forward. During the silence between, they must stay put, as they were once forced to do by the Japanese. Although the children’s game is played in the same fun and simple manner as Red Light, Green Light, the Korean historical background is lost in the translation.

Another element that fails to carry over in subtitles is the character Sae-byeok’s North Korean accent. Hoyeon Jung, the actress who made her debut as Sae-byeok, is also a top South Korean fashion model. She gained over 13 million Instagram followers after the release of Squid Game, making her the most followed Korean actress on the platform. “I think Sae-byeok is everyone’s favorite character,” said Aria Liu (‘23). “She’s pretty cool.” In an interview with W Korea, Jung spoke about her research in preparation for playing the role of a pickpocket who escaped North Korea with her younger brother. Speaking in Korean, she expressed that she watched a lot of documentaries about North Korean defectors, and studied with “a North Korean defector’s dialect teacher” to closely study the accent and understand their lives. In the show, Sae-byeok hides her accent around the other players in the game, and it only comes out when she talks to her brother. This detail was a key characterization, demonstrating Sae-byeok’s careful wariness. However, there is no way for English speakers to pick it up by simply reading the subtitles.

In Korean, linguistic changes are used differently than in English to indicate different statuses between people. These changes are prominent in the sixth episode, “Gganbu,” when a certain character is ultimately betrayed by the man he had grown to trust. Jennifer Jung-Kim, a lecturer who specializes in Korean culture at the University of California, Los Angeles, explained to NBC Asian America that the most formal and polite level of speech adds “-mnida” or “-sumnida” to the endings of verbs. Leading up to the sixth episode, the character had consistently spoken in this form to another character, using titles similar to “boss” and “sir” in English. However, during the game in “Gganbu,” he switches to a less formal type of speech in which many of the verbs end in “-yo.” This shows how over time, the character had developed a trust in the other, which builds up to the shocking moment when the character is finally betrayed.

Despite the subtleties lost in translation from Korean to English, Squid Game has brought a wave of popularity for Korean culture in America. In recent weeks, games such as the honeycomb (“dalgona”)  cookie cutting have gone viral across social media platforms. It’s the first Korean show to ever climb to the top of Netflix’s charts. “It was my first time watching a K-drama, and I really liked it,” said Aria, “which is not much of a surprise, since everyone did.”