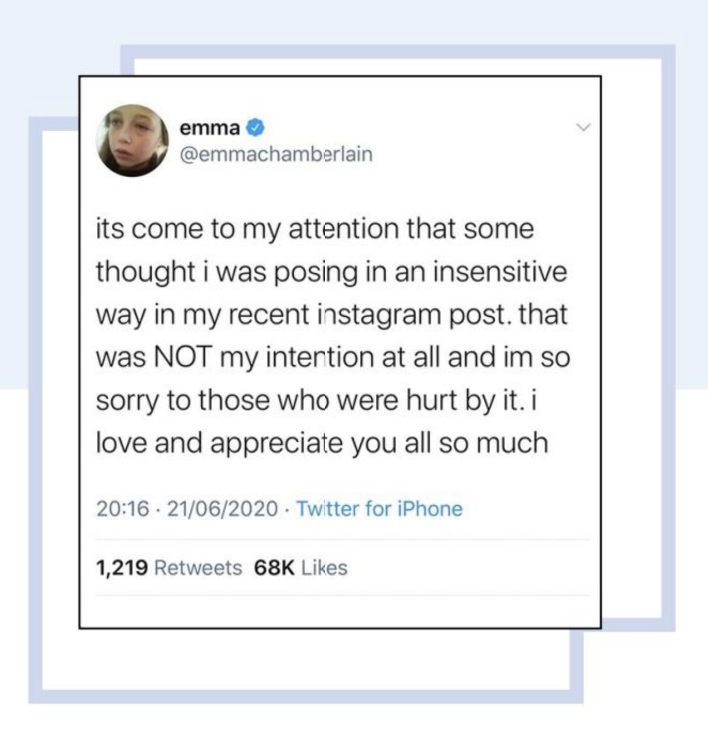 Given the amount of time everyone is spending at home recently, it has become increasingly hard to stay off of social media, whether that be Instagram, TikTok, or the various other platforms. And with this increase of time on everyone’s hands, the popularity of social media trends has also grown exponentially across platforms, with new trends materializing almost every day.

The newest addition to this expansive mass of trends is the “fox-eye trend”, which is credited to have been popularized by celebrities like Bella Hadid and Kendall Jenner. In their social media posts, the supermodels would use a combination of eye makeup and posing to give their eyes a slimmer shape, coined as the “migraine pose.” Specifically, using their hands to pull back their temples or eyebrows as if they have a searing headache. However, the trend has started to take its own shape, and as it’s popularity has grown, so has its polarity, and is now at the center of giant controversy.

“When I was young, a girl came up to me, pulled her eyes back and said, ‘look I’m Asian, ch*ng ch*ng’—she meant no harm, we were in elementary school—but I knew she was mocking me,” explained Haha Shi (‘22). The derogatory names that she was called in her youth followed her all the way to her teenage years, and now those painful memories have been dredged to the surface again with the rise of the fox-eye trend. Notably, the migraine pose that people copy in an attempt to achieve the “model look” has transformed into something eerily similar to the gestures used to demean her and other Asian Americans, glamorizing a struggle many people of Asian American descent have dealt with for decades.

Perhaps the catalyst for the scrutiny this trend has received is social media star Emma Chamberlain—she has almost 10 million followers on Instagram—who was recently criticized for exaggeratingly striking this exact pose in a photo she later posted to her account. Despite the criticism, the only public apology Emma issued was a tweet in which she laments that, “some thought [she] was posing in an insensitive way”, and that she is “so sorry to those who were hurt by it.” Many people weren’t pleased with her apology and saw it as a thinly veiled attempt to avert blame from herself, especially as this is an issue that many perceive as close to home. Her casual treatment of her photo controversy is so frustrating to many, because it reinforces the casual microaggressions and transgressions that occur on an everyday basis against Asian Americans, reducing their identities to a single stereotype, such as what happened to Haha as a child.

Cultural appropriation is defined as “the taking over of creative or artistic forms, themes, or practices by one cultural group from another; generally Western appropriations of non‐Western. The act of cultural appropriation connotes cultural exploitation and dominance,” by the Oxford Dictionary. The delegitimizing and trivializing of traditionally Asian American struggles is what makes this topic so controversial on social media. When the “fox-eye” makeup wasn’t trendy, people’s features were mocked—but the popularization of the migraine pose by mainstream influencers has almost wholly erased the long history of discrimination against Asian Americans for a stereotype perpetuated by Western society. “I think some people think it’s a joke or funny. It’s not—I have deep-rooted memories of people saying innately racist things to me because of features out of my control,” explained Haha. Popular creators like Chamberlain excusing their problematic behavior is what perpetuates the narrative that the fox-eye trend is ok and harmless. “There are just people who don’t understand, and partake in this erasure, like Emma, and even people I know that I see doing it on Instagram,” said Haha. Others evidently feel the same way, as videos of creators expressing their indignation at the trend are getting hundreds of thousands of likes on the social media platform, Tiktok. Jackie Liu, an artist on the app, post of her personal experiences with the fox-eye garnered over one million views and 500,000 likes, proving the virality and overwhelming popularity of the subject.

Despite this, the hashtag #foxeyechallenge has over 14 million views on TikTok and is still filled with videos of people giving tutorials on how to achieve the signature migraine pose of celebrities like Bella Hadid and Chamberlain, regardless of the backlash the trend has received. Sadly, there’s a war going on – one currently being masked by likes on Instagram and aesthetic makeup tutorials, one that has real effects on real people who can’t hide behind a screen.

It’s doubtful that the conversation surrounding the migraine pose will ever reach a satisfied conclusion, just as the conversation about cultural appropriation has been ongoing for decades. One thing to keep in mind—in a culture dominated by the principles of Western society, sometimes the grasp on ignorant behavior can slip through our fingers. Our job as a modern society emerging amongst social media is to listen to the voices of minorities and what is harmful to them, no matter how normalized that behavior has become, and that includes matters such as the fox-eye trend and the migraine pose. Ignorance should not be a trend—let’s not make it one.