Coronavirus: The Facts We Know 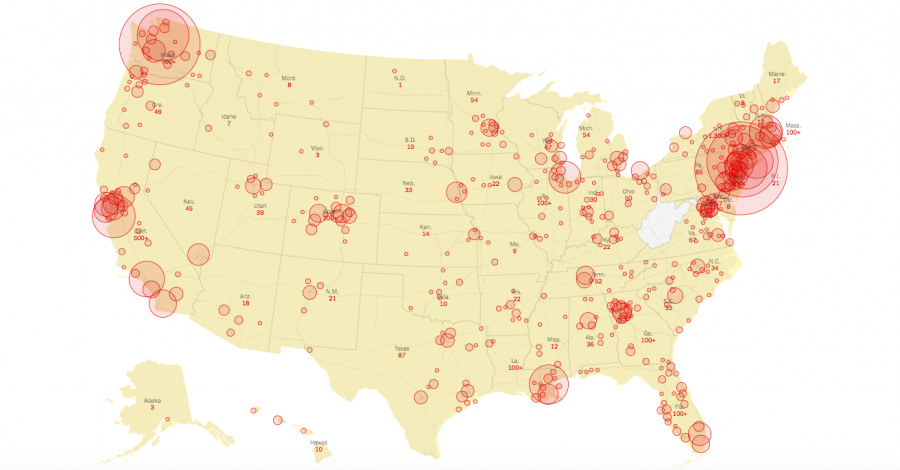 The term “global pandemic”—how coronavirus, or COVID-19, is frequently being referred to now—can incite feelings of worry and fear, leading to wide-scale panic in some cases. A way to avoid these often difficult-to-handle feelings during this time to stay realistic and keep our sights set on the simple facts and statistics of the disease.

As of 10:24 a.m. on Tuesday, March 17, there are at least 5,002 reported cases in 49 states—all but West Virginia—according to a New York Times database. The same source reports that 17 states have seen fatalities due to the virus—New York, Washington, Colorado, Florida, Louisiana, Virginia, Oregon, New Jersey, Texas, Georgia, Nevada, South Dakota, Kansas, South Carolina, Indiana, Kentucky, and California—amassing a total of 93 deaths across the country. New York has been hit the hardest in terms of recorded cases; as of Tuesday, there have been 1,374 cases and twelve deaths. Following that is Washington, with 787 reported cases and 48 deaths—more deaths than all other states combined. Finally, California is currently the third most-affected state, with 583 cases and 10 deaths.

As is common knowledge now, COVID-19 originated in the province of Wuhan, China and spread outward, reaching the United States first on January 21. Since then, the cases have spread across the nation through a number of ways, reports The New York Times, including: a nursing facility in Kirkland, Washington, which saw 57 cases contracted; travel to Egypt, Italy, and China, amassing a further 93 cases; and 113 cases connected to a community in New Rochelle, New York. As well as this, a further 4,304 individuals have contracted the virus from unknown sources.

Studies show, however, that not everyone is equally susceptible to these symptoms, and thus the virus itself. In a study done by Information Is Beautiful using statistics from the China CDC, it was found that people aged 60 and up are most at risk, with the fatality rate reaching 8.8%; conversely, the study reports that the fatality rate for those under 60 is much lower, averaging around 0.38%. It is important to note, however, that these statistics were drawn from studies done specifically in Wuhan and thus do not necessarily reflect global trends on a whole. Using the same database, Information Is Beautiful further reported that those with preexisting conditions, such as cardiovascular diseases or diabetes are much more at risk for fatalities.

Information Is Beautiful also conducted a study on the contagiousness of coronavirus. 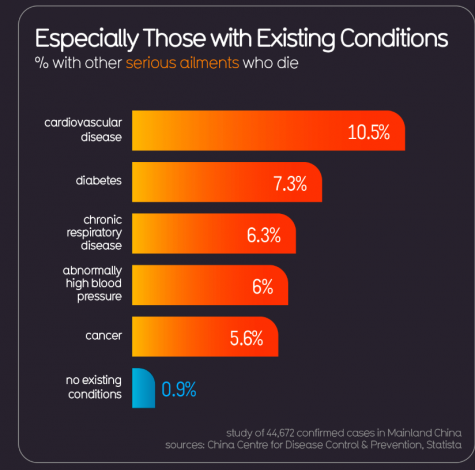 Using data from the CDC, the World Health Organization (WHO), and the New York Times, it reported each individual with coronavirus infects 1.5 to 3.5 additional people; the study also put the fatality rates between 0.7 and 3.4%. According to the study, this makes coronavirus more contagious and deadly than ailments such as the seasonal flu, swine flu, and the common
cold. In contrast, according to this study, coronavirus is less deadly than diseases such as Ebola, MERS, SARS, and tuberculosis; it is also much less contagious than ailments such as chickenpox and measles.

Finally, it is important to note that it is still early days in terms of coronavirus. The situation is bound to evolve and change, as are aspects of it such as the contagion and fatality rates, as well as the number of cases in California and America on a whole. The best any of us can do now is continue to follow guidelines advised by Bishop’s and national organizations and do what we can to keep ourselves healthy.